When I bought Pelagia in 2013 I noticed the cutlass bearing (which holds the propeller shaft in place) was worn out and needed to be replaced.  Too much use of the engine with a worn bearing leads to vibration, and can eventually wear out the shaft, causing it to break (often catastrophically).  The problem with the Contest 33′ (and so far the only problem I have noticed), is that in order to remove and replace the bearing, the propeller must be removed, and the shaft must come forward through the engine space (inside the boat).  This is due to the placement of the rudder skeg immediately behind the propeller, which is glassed in and blocks the shaft from being removed through the back of the boat.  After exchanging emails with designer Dick Zaal (who designed later Contest 33’s…this 1974 model year was designed by U. Van Essen), I resigned to lifting the engine out of the boat and doing the repair in the boatyard.

Of course, in the boatyard, one thing leads to another.  I fell victim to the “while I’m at it…” mentality, and soon found myself reconditioning the entire engine space, including the stringers (slightly rotten), the electrical wiring (messy), and the sound/thermal insulation (scary).  Below are the pictures from this lengthy endeavor, which proved to be relatively inexpensive, though costly in physical and mental energy.  My self-directives for the project was as follows:

1.  Install the engine in such a way that if the boat is upside down, it will remain bolted to the stringers.  When I bought her, the engine was lag-bolted into semi-soft stringers with the wood exposed to any water or oil that might lead into them.

2.  Install the shaft log and bearing housing in such a way that the housing can be removed eventually and the bearing replaced on a workbench, with a vice, perhaps even in an air conditioned room.  These bearings are thermally fitted inside the housings, and extremely difficult to remove while in place.

The entire project was labor intensive.  But far more than that, there is little information on the web about sailboat shaft logs and bearings.  Many seem to use a brass tube (which corrodes faster than bronze in saltwater), or use fiberglass with the bearing glued in there with 3m 5200.  I wanted something more secure and robust, and while the bronze bearing “hollowbar” was harder to source than a 6″ brass pipe nipple, I once again figured “while I’m at it…”.

What is not obvious in the pictures above is listed here:  The entire shaft log is secured on the outside with two big lag bolts drilled into the bearing housing, and on the inside with two screws set into the bronze nut which is fitted permanently to the bronze shaft log.  Epoxy poured into the remaining gap (behind the plywood piece) further strengthens the entire installation, making it watertight as well.  Further fairing in the gap between the bearing housing and the external deadwood leave no home for water or marine life to enter the boat.  The bearing housing has two vents on either side to allow seawater to enter the shaft log, which is threaded into the housing.  This cools the bearing and the shaft packing while the engine is running.  What remains to be seen is how this entire setup can be removed to replace the cutlass bearing, once that one eventually wears out.  But that should be many many more hours of cruising, and hopefully the bearing housing will spin off of the threaded shaft log with little fuss, so that the cutlass bearing can be removed at a comfortable workbench.

Please feel free to email with any questions! 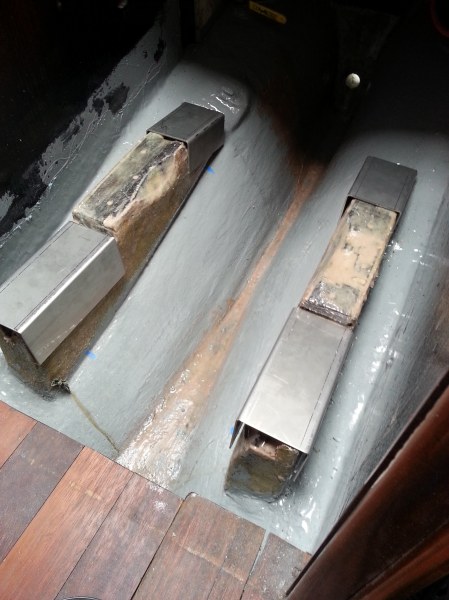